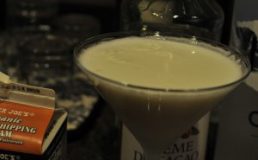 The Velvet Hammer martini is a light creamy drink which is on the sweeter side which makes it ideal as an after dinner drink. The drink is usually served up as a martini, but occasionally you can find it served as a short-ball over ice.

Velvet Hammer seems to be one of those drinks that nobody knows exactly what goes into it. There are a lot of recipes that varies from one another. Different recipes seems to call for different flavors. The only common thing between all the recipes I have found is its profile, which is usually light and creamy with a touch of either Vanilla, Coffee or Orange.

The recipes are so varied that it might actually be better to say that many different drinks have been given the same name: Velvet Hammer. This recipe is one of simplest and is probably also the lightest of them all.

The following are similar drinks to the Velvet Hammer, mostly because they are creamy and sweet and often served as an after dinner drink.