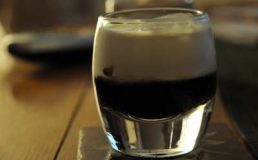 The White Russian is a very easy drink to make. Made famous by The Dude in The Big Lebowski, it is a sweet cocktail which could be served as a dessert drink. There are numerous recipes and variations of the drink as it is quite possible to vary the proportions of the ingredients to suit the taste.

The drink is a layered drink, which means the ingredients are layered in the glass rather than shaken as with other cocktails. You layer the cream over the Vodka and Kahlua so that it has the distinctive look of the traditional White Russian and the definite contrast of the colors. You should either an old fashioned glass or a short ball to server the drink.

White Canadian: Use Goat’s milk instead of the light cream
White Cuban: Use Rum instead of Vodka. Probably should use Havana Club Añejo Blanco if you like it to be “real Cuban”.
White American : Use Whiskey as the base spirit instead of Vodka
White Mafia : Use Frangelico instead of Kahlua
Black Russian : The same drink but made without any type of cream or dairy.
Dirty Black Russian: The drink does not have any cream but is substituted with Coke.