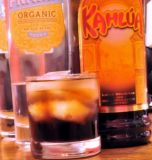 The Black Russian is an iconic and popular cocktail that is also very easy to make. It is probably one of the simplest of all the cocktails to make. It contains just two ingredients: Vodka and a coffee liqueur.

This drink can be viewed as a variation of the more popular dessert drink known as the White Russian or the Dirty Black Russian cocktail. The cocktail is usually served as a low ball over ice cubes also known as on the rocks. The drink is usually served with no garnish.