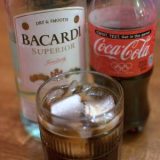 Cuba Libre is a highball drink made with Light Rum, Coca Cola and Lime. It is also known as Rum and Coke, especially in the English speaking western countries including Unites States, UK and Canada. As with most highballs, it can be made with varying proportions to suit your taste.

Cuba Libre, meaning Free Cuba, has a lot of variations that are popular around the world by various names. Most local variations are made by substituting White Rum with either a locally made rum or another popular local liquor.

Cuba Light: This drink uses Diet Cola instead of regular Coco Cola.
Tico Libre : This variation is made with Dark Rum and Diet Cola instead of the Light Rum and Coco Cola.
Cuba Pintada : This is another variation of the drink where Coco Cola is substituted with Club Soda. Optionally, a large splash of the Coco Cola can be added as well.
Cuba Libre y Despierta: Also add a shot of the Kahlua Coffee liqueur to the above recipe.
Cuban Missile Crisis: This is exact same recipe but with a higher proof Rum. Any high proof Rum will do such as Bacardi 151.