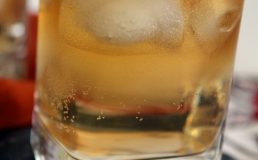 Seven and Seven (also known as 7 and 7) is a highball cocktail similar to the Whiskey Cola or Rum and Coke. The drink has just two main ingredients and derives its name (7 & 7) from the brand names of ingredients itself, just as with Jack and Coke.

The drink is usually made in a highball or Collins glass and is served over ice. You could also use an old fashioned glass instead of the Collins glass especially if you are using a 1:1 ratio of whiskey to soda. I generally like to vary the proportion of the ingredients so as to suit the taste of the drinker, but 1:2 seems to be the most accepted ratio.

The 7 and 7 drink is probably one of the easiest to make due to several reasons. For one it has only two ingredients and a garnish which is possibly the lowest number of ingredients you can have for a mixed drink. The drink can also be made in the serving glass, without the need to other utensils or containers such as a shaker. You may use a lemon wedge or a lemon peel as garnish.